If you are getting married from this summer, you will be in full search of the ideal wedding dress. For this reason, we wanted to travel through time and show you some of the dresses that became fashion icons, creating new trends and that have inspired so many brides throughout history.

Because at Gemma Gonzalez Events we love the details and understand where they come from, contact us if you want us to accompany you to find your ideal wedding dress.

In Instagram stories we have made you participants and among all you have chosen the fifth dress, and what a good choice!

Wait until the end to see it!

An attractive and brilliant American Hollywood actress who married the prince of Monaco, Rainier III, on April 19, 1956, in the Cathedral of Saint Nicholas, thus joining two very different worlds.

Grace Kelly was spectacular. The iconic wedding dress was created by Helen Rose, the wardrobe manager at Hollywood MGM studio.

Helen worked almost two months with 36 seamstresses to manufacture the design. To make it, more than 100 meters of silk tulle and more than 25 meters of taffeta were necessary. The dress had a very pronounced waist, highlighted by the volume of the skirt, and was finished off with a long-sleeved Brussels lace body inlaid with pearls. It was the wedding dress of a fairy tale princess.

At the end of the ceremony, the bride went to the Church of Santa Devota to deposit her bouquet. Before, they had released multitudes of pigeons into the sky of Monaco.

22 years after Grace Kelly and Rainier’s wedding. His daughter Carolina de Monaco married at the age of just 21, with Philippe Junot. It was June 29, 1978, also in Monaco.

Carolina was the forerunner of the boho-chic style, with a look far removed from the canons that marks any royal wedding. In addition to a very seventies collection, it wore a design by Marc Bohan for Dior with embroidery, fluid silhouette and bell sleeves. A relaxed style with hippie influences that contrasted with the groom’s formal morning suit and top.

The marriage only lasted two years, but that look has remained in memory ever since.

Younger sister of Queen Elizabeth II, Princess Margaret accepted, at 29, the marriage proposal of the English photographer and filmmaker Antony Armstrong-Jones, after voiding her engagement to Captain Peter Townsend. The marriage bond was officiated on May 6, 1960 at Westminster Abbey.

She made the trip from Clarence House to the abbey in a carriage and arrived escorted by eight Bridesmaids. Inside Westminster, 2,000 people waited, and Princess Margaret walked the blue carpet in a gorgeous white silk gown designed by Norman Hartnell, a classic long-sleeved model in a flowing eight-layer gender skirt. And a diamond tiara from 1870, with a matching necklace. The then Archbishop of Canterbury officiated the ceremony and, once they became husband and wife, the couple went to Buckingham Palace.

With great expectation and following protocol, from the balcony of Buckingham they greeted the crowd that was waiting for them and then they enjoyed with their 120 guests a lunch and a toast. After the banquet, the bride and groom made their way to the River Thames to begin their Honeymoon.

Soraya married the Shah of Iran Mohammad Reza Pahlev, at the Marble Palace of Golestan in Tehran on February 12, 1951. A wedding fit for kings.

The bride wore a silver lamé pearl dress adorned with more than 20,000 marabou stork feathers and 6,000 embroidered diamonds, weighing more than 20 kilos, designed for the occasion by Christian Dior.

Among the 2,000 guests was Aga Khan III. The ceremony was decorated with 1.5 tons of orchids, tulips and carnations, flown in from the Netherlands. Entertainment included an equestrian circus from Rome. 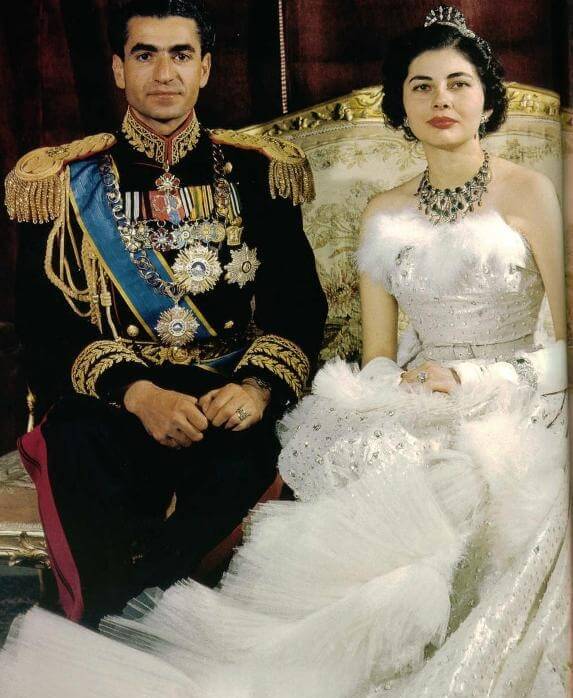 And the fifth and last dress, voted for by you:

Her marriage bond was the social event of the year in Hollywood, more than 700 guests attended and was described as “the wedding of weddings”, since the young British woman was a well-known movie star.

She wore a spectacular empire-cut design by Helen Rose (6 years before she designed Grace Kelly’s). Almost 23 meters in pearl satin decorated with cultured pearls and rhinestones, the dress incorporated a corset that fitted the actress’s waist and was accompanied by a veil over nine meters long made of silk. More than fifteen people worked full time for almost three months to complete the dress.

What has been your favorite wedding dress story? Have you been wanting to know any more stories?

We are huge fans of Grace Kelly’s dress!

This site uses Akismet to reduce spam. Learn how your comment data is processed.